South Carolina’s unemployment rate is 9.9 percent – considerably higher than the national average. You can see a transformation in South Carolina in old factory towns. New plants have sprung up, but workers there will tell you they’re a world apart from the old ones. As part of a story co-reported with the Atlantic Magazine, Adam Davidson of NPR’s Planet Money team visited Greenville, South Carolina, to see the transformation of manufacturing up close.

ADAM DAVIDSON, BYLINE: Greenville County, South Carolina is where manufacturing’s past and future live side-by-side. I don’t mean that in some metaphorical way. I mean, it is a visible fact. There are abandoned textile mills everywhere you look.

DAVIDSON: I’m riding around in a squad car with Deputy Sheriff Mike East and his boss, Sheriff Scott Wilson, who took me on a tour of Greenville’s past.

There are so many mills. They’re hiding behind other mills.

SHERIFF SCOTT WILSON: There’s a mill behind every blade of grass.

DAVIDSON: Ten to fifteen years ago, life in Greenville was organized around these mills. Each mill had its own village, its own church, its own bar. These places were abandoned over the last decade or so as mill after mill went out of business. What’s left are deeply depressed near ghost-towns. But sometimes, amid the stretches of shuttered buildings, you can find a living relic.

DAVIDSON: Christine’s sign reads, Come to the holler for a cold swaller(ph). You could also come to Christine’s for a fist-fight or if you wanted to be shot at. Sherriff Wilson had an unsettling number of fight stories from Christine’s. When the cops left, I decided I had to go inside, but I was really scared.

But instantly when I walked in I felt like a fool for being scared. Those fight stories are all very old. The room now is empty, except there are a few white-haired regulars nursing drinks at the bar. They told me about the old Greenville, when the economy was booming. Christine’s was packed morning, noon, and night, before and after every one of the three shifts at the nearby mill. Trucks would speed in and out of the factory gates nearby.

TERRY LEE SUTTLES: You made more money. You could just make money. And it was good money.

SUTTLES: Everybody knowed somebody that worked in the mill, and usually they was hiring. And if you had a friend, you could always get in, you know. I wasn’t really old enough to work, but I went to work.

DAVIDSON: Did you drop out of high school?

DAVIDSON: Which everyone did around here, right?

DAVIDSON: And this is the key fact. This is what made life in the old Greenville so rewarding. People with minimal education could work in a factory and support a lifestyle that their grandparents could only dream of. And the people here – they knew it.

Wayne Staten and Larry Hale worked in the old Greenville. They drove trucks that took the mill products all over the continent.

HALE: Yeah we’ve done things that a lot of people dream of doing, that never ever have a chance of doing.

HALE: Like when I went to Canada and I started dating this hairstylist up in Canada, wanted to marry me. And down in Mexico, the things I done. And when I lived in Houston, Texas. We lived a fantasy life. We lived our lives to the fullest. You got to cherish everything that’s out in front of you. You got to grasp it and love it; and if you don’t, you’re losing out. Love everything.

HALE: Yeah. OK. I agree with you there.

DAVIDSON: Compare this fantasy life to the present. There are still factories in Greenville – they’re open and working, and they employ people, although now you have to have a high school degree, usually, to get a job. And as I found out, the workers now feel a lot less certain about their job prospects. For example, I visited the factory floor of Standard Motor Products.

DAVIDSON: They make replacement parts for car engines. I thought this would involve big, noisy machines stamping out parts and spewing oil. Instead, I saw very nice, high tech machines and not that many workers who were hunched over microscopes or working on computer programmed machinery. It looked more like a science lab than an assembly line.

Madeline “Maddie” Parlier operates one of the machines on the floor. She doesn’t have a college degree, and she doesn’t need one to operate this machine. It runs with a push of a button. But she remembers a time when factory work wasn’t quite so automated. In her old job at a kayak-building factory, she used to work up a sweat.

MADELINE PARLIER: You know, I’m here all day and I’m used to sweatin,’ I mean really sweatin’. You know, I come here and I’m putting pieces and I’m like, what am I doing?

DAVIDSON: ‘Cause it’s so many machines doing what people…

PARLIER: Right, it’s so different. To see how far factories have come from the old time that I’m used to, it’s an eye-opener.

DAVIDSON: Machines do so much more of the work in today’s factory. And the machines have bred a new kind of factory worker, workers like Ralph Young, who doesn’t just have to push a button.

RALPH YOUNG: And we have a microscope, a hot stand, snap gauges, ID gauges, we use bore mites, go-no-go plugs…

DAVIDSON: Ralph is the future of manufacturing. He’s acquired the knowledge and skills to adapt to the new technology on the factory floor. But for Maddie and many millions of others, the pace of change has been bewildering. She is still adjusting, and she will have to keep adjusting as the machines grow more sophisticated and the work less physical. The question is, can Maddie, and the 11 million or so other manufacturing workers in the U.S. keep up?

Tomorrow, when our series continues, we’ll look at the changing skills of the modern-day factory worker, and how they affect the job prospects of workers like Maddie.

INSKEEP: You can find the magazine version of Adam’s story on news stands or at the Atlantic.com/magazine.

INSKEEP: This is NPR News. 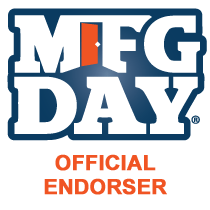